Following up on the Seaside Heights Carousel post from last week, my friend Paul Schopp forwards this undated image of that same attraction in an earlier incarnation when it started delighting riders in 1901, at Burlington Island, at the Island Beach Amusement Park.

Events today can turn on a dime, and the emotions aroused by the impending auction of the Seaside Heights Carousel have given rise to a new effort to bring the carousel back to its hometown, Burlington.

Guernsey’s Auctioneers posts a press release and many photos accompanied by a tune from the carousel’s Wurlitzer here. No telling how long that will be available.

It doesn’t cost anything to hear about his crusade to save the historic amusement from being relocated elsewhere or sold off piecemeal.

Cheryl Baldorossi-Painter provides this description for the FB group she started to  compliment Newman’s crowdfunding appeal.

Casino Pier, of Seaside Heights, is selling their historic carousel, most likely in pieces. This isn’t just any carousel though, this one of the only four original, hand-carved, working carousel’s left in the world. It started its life on Burlington Island, at the Island Beach Amusement Park, in 1901. It then survived the park’s two fires and its eventual close. It was then sent to Casino Pier and has remained there, one of the only rides to survive both Hurricane Sandy, and the 2012 Seaside Heights fire. What we want to do is bring this carousel back to its hometown, Burlington. This is a historic piece full of life, spirit, and memories, of many people of both Seaside Heights and Burlington. It would be a shame to let it dissapear from the world. That’s why we need your help. We need to raise a lot of funds to save the carousel from destruction. Connor Newmann has started a go fund me campaign to save the carousel up now for auction by Seaside Heights. Support him and his efforts to bring the carousel back to where it originated, historic Burlington City, NJ. Please add friends to this group so we can bring the carousel back home.

Watch as the social network members post news of the latest developments, “exploring every avenue to keep it from being dismantled”, including forming a non-profit and praying for a “Hail, Mary” assist from Jon Bon Jovi and Bruce Springsteen.

For those interested in pursuing further the origin story of the historic carousel whose survival has now captured the attention of so many people, read about the Floyd L. Moreland Dentzel/Looff Carousel at discoverseasideheights.com. Since there is every likelihood that the webpage will be taken down, we reluctantly quote a portion of it here: 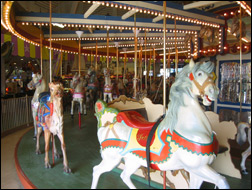 The Casino Pier carousel has, like many storied carousels, an interesting history. The machine was originally part of a trolley park called Island Beach Park. Oddly enough this was not the Island Beach found just miles from Seaside Heights but was located in Burlington, NJ. In 1928 the park burned and the fire damaged the carousel. An area resident, Linus Gilbert, rescued and rebuilt the machine. He bought and added carved figures that were not part of the original. This resulted in a carousel with a mixture of animals from a few different revered carvers, some of whom had worked from different carousel manufacturers. The work of William Dentzel, Marcus Illions, Charles Carmel, and Charles Looff are all represented in this one carousel. The carousel was brought from Burlington to Seaside Heights in 1932. It was placed in an open frame building and was still under the care and management of Linus Gilbert. This first building was the beginnings of what would later become the Casino Arcade and Casino Pier. When the carousel building was first built there was a fishing pier located a short distance away. The pier then had nothing to do with what was soon to become a growing amusement area. Eventually the “Seaside Heights Casino” was built to house the carousel and to add more attractions around it. This same building is still in place today. The most recent large scale change to the structure took place in the 1980’s. The building was made smaller to keep it from blocking Ocean Boulevard, which is the main street paralleling the western side of the boardwalk. The Casino Pier carousel was almost lost to another disaster – selling off the animals to collectors. The owners of the carousel seriously considered dismantling their machine in the 1980s. Some animals fetched more than $100,000 at auction during that decade. The selling off of the animals met strong opposition from an unlikely corner, Dr. Floyd Moreland. At the time he was Professor of Classics and Dean at the City University of New York. He had ridden the carousel as a child and later operated the ride as an employee of the Casino Pier. Dr. Moreland convinced the owners they should let him restore the carousel. This project took a number of years and involved numerous people chipping in their time or money to help Dr. Moreland. Their collective efforts helped bring back the vibrancy and beauty of the carousel.

For more history of Island Park on Burlington Island and truly rare old images see the scans and information our expert Town Historian has posted here (scroll about halfway down the page).

You have seen before on this website here  several image variations of the steamer Columbia.

Mr. Schopp reveals more details about the amenities of the boat that “…became the queen of the excursion trade, operating innumerable trips to the various picnic groves along the river shore, moonlight dance cruises and, beginning at the turn of the twentieth century, to the many amusement parks that dotted the Delaware River shore.”

Actually makes me wish I could go back in time.   – John McCormick

P.S. To further illuminate the topic for extreme carousel devotees Paul explains that the terms merry-go-round and carousel are not synonymous – “A carousel features a menagerie of different hand-carved animals while a merry-go-round only carries horses.

Another tidbit of information concerning these wonderful amusement rides: American carousels and merry-go-rounds travel in a cyclonic or counterclockwise direction while those in Great Britain go around clockwise.”

Remember you read it here. You know you’ll use this bit of minutiae in a conversation soon. Thank you, Paul.

Who doesn’t love a merry-go-round? Dr. Floyd L. Moreland once described the “magic” of riding these “awesome machines.” His 2007 cover article for Carousel News and Trader is reprinted in a recent post at Antique Carousel News.

Soon, the joy of experiencing a ride astride one of these magnificently restored hand-carved carousel creatures,  surrounded by the sound of an authentic Wurlitzer Military Band organ, may be a thing of the past.

A July 29 NY Times piece (Auction Could be Undoing of Carousel That Survived Hurricane and Fire) details the developments which have led to this sad plight, and the Asbury Press has some luminous photos posted online.

It was a distraught Sunbelt State resident leaving feedback here who first alerted me to the effort to save the historic 1910 Casino Pier Carousel in Seaside Heights, NJ from being auctioned off.

Will you please email me? I am interested in saving the Seaside Heights Carousel and am wondering if you and the community are trying to get donations to save it, instead of dismantling it as I have been told. I live in Arizona now, but grew up on the Jersey Shore and was very sad when I heard the Asbury Park Carousel was auctioned and dismantled. I have signed an online petition but feel there needs to be more done. Thank you, Carol J Mann

We can only add our voice to the intensifying movement to preserve this rare seashore treasure that is now approaching critical mass.

Doubtless, Ms. Mann arrived here at rivertonhistory.com searching for Seaside Heights images. While we have a few SSH images, we have none of the carousel. (If anyone cares to send us a card or a scanned image of one we can add it to our exhibit. Send me your info below and we can make arrangements.)

Speaking of postcards, cardcow.com, a reputable online seller from whom I have made purchases, posts two examples of already-sold vintage postcards showing the Seaside Heights carousel. The description below comes from one.

The famous 1910 Dr. Floyd L. Moreland Carousel at Casino Pier, Seaside Heights, N. J. this hand-carved landmark on the boardwalk, which received an Historic Preservation Award in 1991, is one of only two surviving American-made classic carousels in the State of New Jersey.

You can see them here. Among my favorites are the large letter postcards.

Why is it that the mere glimpse of an image, or the whiff of a scent such as that familiar sea air as you approach one of the Garden State’s barrier islands, can release a flood of memories transporting one, at least for a while, back to an earlier time?

If you think this classic seashore attraction is worth preserving, you might check out the FB page, or possibly add your name to the 5000+ signatures already on the petition at Save the Antique Carousel.

Don’t feel left out if you live elsewhere. Use the features of Google Maps to find carousels from coast to coast at The National Carousel Assn. website.

Cherish these last days of Summer 2014, wherever you are, and make some more memories. Remember, these will be tomorrow’s “good ol’ days.” – John McCormick